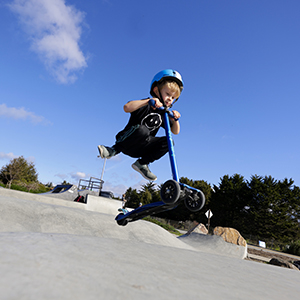 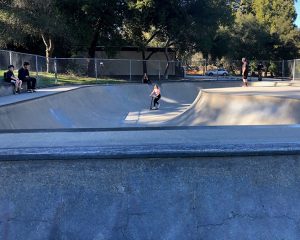 Jim Keefe Skate Park (Formerly Highland Skate Park)
8500 Highway 9 Ben Lomond
9AM-Sunset
A lil’ bit in the boonies, tucked in a shady area off of Highway 9 past Scotts Valley, Jim Keefe Skate Park (formerly Highland Skate Park) is a well-balanced skate land for intermediate and advanced riders. At the end of the day, it’s really about the park’s bowl. That’s why many skaters choose to spurn always-crowded spots like Skypark and take the meandering drive to the 8,500 square foot concrete structure. Jim Keefe is rarely crowded so you’re sure to have first crack at the bowl and solid mix of street features. There’s a cool little fenced off area for beginner’s with a long and low flat rail and a few low-to-the- ground ledges perfect to practice grinds and other basic tricks. Jim Keefe is an under-utilized skatepark, and well worth the trip for an afternoon of free and unencumbered shredding. 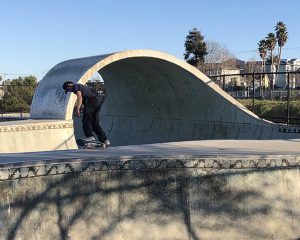 Ken Wormhoudt Skate Park at Mike Fox Park
299 San Lorenzo Blvd, Santa Cruz
9AM-7PM Monday-Sunday
Ken Wormhoudt Skate Park at Mike Fox Park’s boasts a divine mix of street skating, pipes, and bowls that make it a must-shred-destination for locals and Valley-folk alike. Prior to the grand opening of local-legend Zach Wormhoudt’s impeccably designed 15,000 square foot skatepark– he’s designed over 100 skateparks around the globe! – Mike Fox’s picnic area and 4 tennis courts were rarely used. The park itself was hardly visited; save for the occasional transient. Today, the $1.3 million facility, hugging a gentle and picturesque curve of the San Lorenzo River, is packed by newbies and vicious shredders every single day. Many skaters, some from as far away as Europe, make the pilgrimage to downtown Santa Cruz, just to ride the park’s rails, bowls, and stairs, and try to conquer the first full pipe in Northern California. The park is named after Zach Wormhoudt’s dad Ken, who designed and built the world’s first public skate park – legendary Derby Park— in Santa Cruz County in 1974. Zach took over the Mike Fox Park project when Ken passed away. Ultimately, the biggest challenge Zach faced was constructing the 16-foot-tall full pipe. It was an engineering feat and a true work of art, crafted it in a way that mimics an ocean wave. It’s not just about the pipe though. The well-maintained and carefully cared for bowls and a wide array of street skating features elevate Ken Wormhoudt Skate Park into the upper echelon of skating destinations. 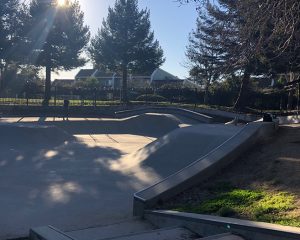 Live Oak Skatepark (Jose Avenue Skatepark)
Jose Ave, Santa Cruz,
Sunrise to Sunset
831-454-7501
At 4000 square feet, Jose Avenue Skatepark is far from the largest park in Santa Cruz County. But it’s still a fun, and popular destination for skaters in the Live Oak area. There are no vertical elements to be had here, just a ton of great street features. The concrete is always super smooth and the skatepark, just like Jose Avenue County Park, is well maintained and carefully cared for. Built in 2000, Jose Avenue Skatepark boasts a ton of clean lines and a sweet collection of innovative skateable elements. The County Park itself is family oriented and feels safe. BBQ pits and covered picnic seating are available, and many families like to spend entire days here — skating, playing in the slide/climbing gym area, letting Fido loose in the dog park, and tending to public vegetable gardens. Parking can get tight, so if you decide to skate Jose Avenue try to arrive early in the day. 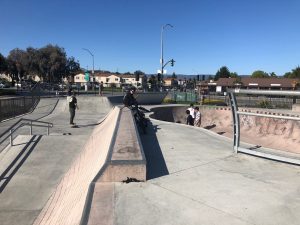 Ramsay Park
1301 Main Street, Watsonville6
Sunrise to Sunset
For 10 years, Ramsay Park was the home of a humble, somewhat dilapidated temporary skatepark. It just didn’t cut the mustard for Watsonville’s and South County’s growing contingent of skateboarders. Ramsay Park’s new $600,000 in-ground and permanent skatepark officially opened in May of 2016 and has been a popular and much-loved skate spot ever since. Santa Cruz’s Wormhoudt Landscape Architecture designed the park – that features a sweet centrally located bowl, extensive street features, rails galore, a wall ride, and a massive quarter pipe. The old temporary skate park was tucked into a dark semi-sketchy corner of Ramsay Park. It offered a rudimentary experience and developed a bit of a bad reputation over time. The new, bright and shiny skatepark is located at Ramsay Park’s main entrance to increase visibility, address safety concerns, and attract skaters of all ages and skill levels. For years, Watsonville lacked an adequate skating facility, so kids took to the streets, skating on private property and school campuses. Ramsay’s 10,000 square feet of concrete bliss features a wide range of options perfect for novice skaters and experts alike. Skating is getting huge in South County, and Ramsay Skatepark has become the vibrant community’s epicenter. 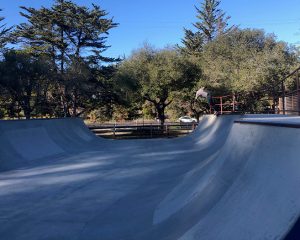 Seacliff Skatepark
McGregor Dr, Aptos
The gleaming, brand spanking new Seacliff Skatepark is a dream come true for the long-neglected skaters in mid and South Santa Cruz County. With views of the Monterey Bay and “skateable art” the pristine $300,000 skate land is jam packed with skaters of all levels each and every day. Dreamland Skate Parks, working in concert with local firm Bredy Construction, designed Seacliff Skatepark. After years of debate and waiting, construction of the long-awaited skate spot was relatively speedy, taking seven weeks and coming in under budget. Over 500 people attended the park’s unveiling in February 2020. It was a wild joyous occasion with skate demos, dancing, live music by local band The Cement Ships, and of course, copious shredding. Located just off of Highway 1 along McGregor Drive, the park is in a perfect spot,—just steps away from Seacliff State Park. Local artists provide swaths of vibrant color and intricate design features in the skatepark, picnic areas, and along the park’s snaking walking paths. You’ll find subtle (and skateable!) references to local monuments like the S.S. Palo Alto (Aptos’ famous cement ship). Seacliff Skatepark provides a long awaited, and important, recreational opportunity for mid-County skaters long used to skating school grounds, local churches, and other private property. Local skaters can thank lifelong Capitola resident, and founder of the legendary skateboard company NHS, Richard Novak for footing most of the bill — for what is now one of the hottest skate spots in the County. 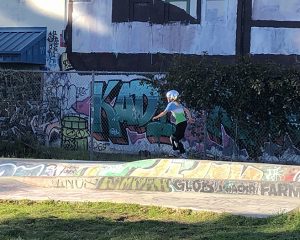 Sergeant Derby Park
508 Woodland Way, Santa Cruz
Sunup to Sundown
831-420-5270
The legend. The Icon. Derby. Originally designed by Wormhoudt Inc. in the 1970’s, Derby Park is one of the oldest public skate parks in the world. The skate spot is located on the Westside of Santa Cruz County and is a true landmark of skateboarding history. The park is a survivor, weathering numerous dips and rises in skateboarding’s popularity and some ultra-dark periods of widespread skate park closures. Many parks closed permanently in the 1980’s due to skyrocketing insurance costs. Long known for its wall to wall graffiti and rough rides, Derby Skatepark recently received a much needed (but somewhat controversial) facelift. Santa Cruz County public officials believed the historic park to be too dangerous to skate and demanded that significant changes be made. Some nostalgic skaters fought hard against the proposals, but in the end acquiesced. The County turned to the park’s original creators, Wormhoudt Inc. to make all of the alternations and to add new (and smooth!) concrete and four inches of rebar. Some of the changes to Derby include a “rocket pocket” at the start of the snake run and a 40-foot section of original style double-sided lip at the top of the snake run. Wormhoudt Inc. took extra care to keep the original form of the legendary park. Most of the firm’s work focused on fixing surfaces and dangerous tripping hazards. Much of the park’s famous graffiti is gone, and Derby feels safer – and cleaner- today than at any time in its storied history. Derby is a bucket list destination for all skaters. No doubt about it. 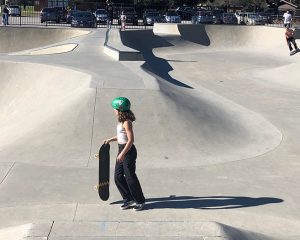 Tim Brauch Memorial Skate Park — Skypark in Scotts Valley
361 Kings Village Rd, Scotts Valley
8AM-7PM
svSkatePark.com
At 22,000 square feet, Tim Brauch Memorial Skate Park in Scotts Valley’s Skypark is the largest skate mecca in Santa Cruz County. With buttery smooth concrete and impeccable craftmanship, the park offers a wide variety of terrain for skaters of all levels. After years of planning, Tim Brauch Memorial Skate Park finally broke ground in April of 2004, and opened to much fanfare on September 21st. Over 500 people turned out to the unveiling. Most were blown away by the park’s sheer vastness and superb collection of skateable features. Wormhoudt Inc., the architects of over 70 skate parks around the globe designed the skating playground. The park’s wide and varied selection of bowls – of all varieties and sizes – is unmatched. Conquer the 2-foot-deep micro bowl and then skate on over to the super-speedy and kidney shaped 4-foot-deep mini bowl. Once you’ve had enough with the mini’s metal coping and fun lines, take the dive into the 8-foot-deep clover shaped big bowl. The bowl’s ultra-smooth and perfectly maintained concrete and slick metal coping make it one of the park’s most popular features. Tim Brauch is all about space, and you’ll have plenty in the park’s fun and extensive street course. A selection of quarter pipes border the street zone — containing a collection of stairs, steps with rails, and yet another oval bowl. The skate park is named in honor of American professional skater Timothy Brauch, who died of cardiac arrest at the age of 25. Each year, friends gather at Tim Brauch Memorial Skate Park for the annual Timothy Brauch Memorial Contest. Dozens of skaters show up to shred Tim Brauch Skate Park each day. The park can get crowded, but with over 20,000 square feet of skateable terrain it hardly feels like it. Don’t show up to the park without a helmet unless you want to get a ticket from the always hovering Scotts Valley coppers. And watch out for the swarming army of grommets on their razor scooters. 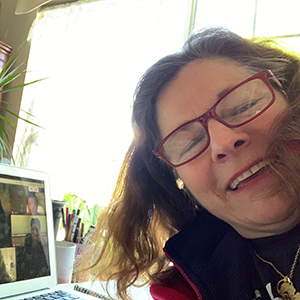 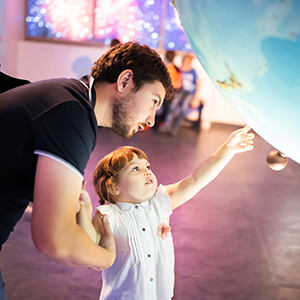 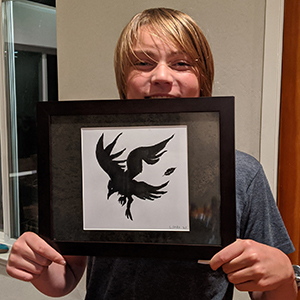 Lonan Dickinson Artist of the Month