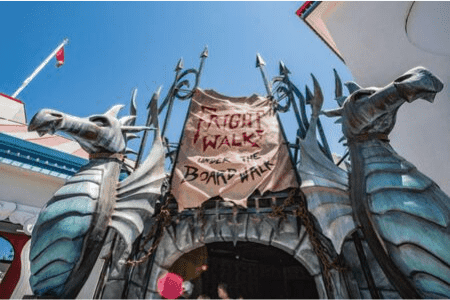 A History of Being Scared, Madame Tussaud to Santa Cruz Dark Rides

Dark and shadowy places have always held a fascination for those who dare to enter them. Caverns and caves, moonlit graveyards, ominous forests, and abandoned houses were the “haunted attractions” that inspired dares to enter in the days long before amusement parks, movies, or even electric lights.

Ghost stories told around campfires were the main source of supernatural chills until around 200 years ago, when a legendary wax museum, Madame Tussaud’s in London, England, presented a Chamber of Horrors—scenes of historical executions and murders.

In the 1890s, a new kind of live-action theater shocked and terrorized audiences in Paris, France. Called the Grand Guignol (pronounced: geen-yole), it quickly became notorious for gory special effects during macabre enactments of violence and murder, often causing audience members to faint from shock.

In the 1930s, the Halloween tradition of turning peoples’ own homes into haunted entertainments began, but the first hugely influential Haunted Attraction was Disneyland’s Haunted Mansion (inspired by our nearby Winchester House) that opened in 1969. But that was almost 40 years after Santa Cruz’s first scary ride at the Boardwalk.

For over 80 years, the Boardwalk has been creating dark and scary places to thrill and chill. It all began with a spooky ride called Dante’s Inferno—A Trip to Hades, opened in 1932 by Ed “Doc” Reicher, a Boardwalk concessionaire, in a converted four-lane bowling alley. Two years later, Reicher redesigned his ride with a new theme and new name—Laff Land—replacing demons and devils with crazy clowns. The attraction became so popular that the Boardwalk owners, The Seaside Company, took over the ride and made it their own, ending Doc Reicher’s lease on the space.

By the 1950s, pirates had invaded. The Boardwalk’s cavernous ride was renamed Pirate’s Cove, until ghosts and ghoulies returned to inhabit the Haunted Castle we know today. The ride has gotten bigger and better in succeeding decades, nearly twice the side of the original, and filled with the latest special effects.

The Boardwalk started getting truly serious about fright-making in 1996 when a stand-alone, Halloween season walkthrough called Terror on Beach Street was erected in the parking lot. It returned every year until 2001. It featured an inner courtyard filled with terrors that included zombies emerging from graves and enacted executions by decapitation and electric chair. Unlike today’s attractions it featured live actors as the monsters, and fewer mechanical effects.
The Beach Street haunted house was where the Boardwalk’s philosophy of creating more eeriness and jolts, with no blood and less gore was developed.

The Boardwalk offers thrills in the dark for even the littlest fun-seekers. The vintage Cave Train ride is a place for kids to enter a dark and mysterious place without the sights and shocks of the ghostly themed rides.

The Haunted Castle is where the real scares begin, as riders are taken through room after room of macabre scenes meant to elicit more “eeks” than “shrieks” in keeping with the Boardwalk’s  And then, when kids are old enough, and have survived the Haunted Castle, it’s time for the Fright Walk. 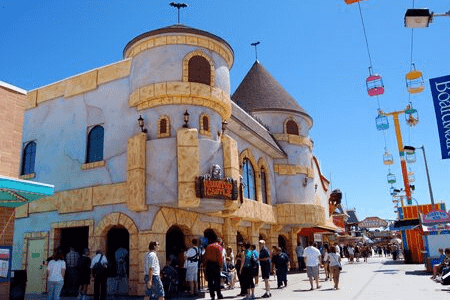 The original Fright Walk, recommended for 13 and up, opened in 2004, but was relocated in 2016-17 into the larger subterranean dungeon it occupies today. It now lurks near the entrance to the park, guarded by menacing gargoyles. It’s a walk-through journey into darkness—very dark darkness—with jump-scares, mazes, and shocking scenes throughout.

Those passing the threshold of Fright Walk will be engulfed in pitch black, so warn kids of all ages to take care not to walk face-first into a wall or smack nose-to-nose into a mirror. If you can’t endure the suspense of not knowing what’s coming, you might be grateful for a smartphone flashlight app. You might even bring a mini flashlight to dispel the gloom. (But do you really want to?)

Don’t expect costumed Fright Walk workers to jump out from a dark corner to scare the jeepers out of you. Your companions and other fright walkers are likely to be the only living souls you’ll encounter inside. Make no mistake; the Fright Walk is not a kiddie attraction! It’s not recommended for pre-teens. But if your monster-loving middle-schooler can’t be talked out of entering, be warned: there’s no refunds for the faint of heart who can’t make it to the Final Exit.

The Boardwalk dark rides are open through October on Saturday and Sunday only from 11 am to 7 pm. 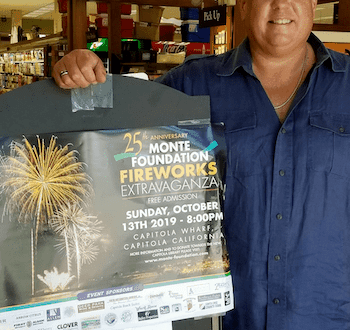 He Lights up the Skies for Kids: Marc Monte Honored for Donating $4 Million to Schools 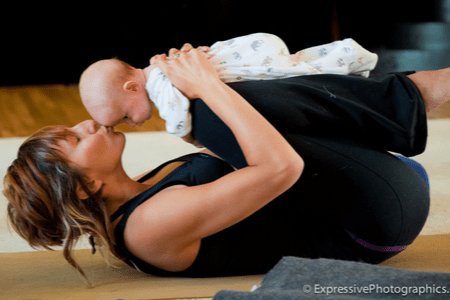 The Birth of a Mother: Yoga Can Help Childbirth and Infant Rearing 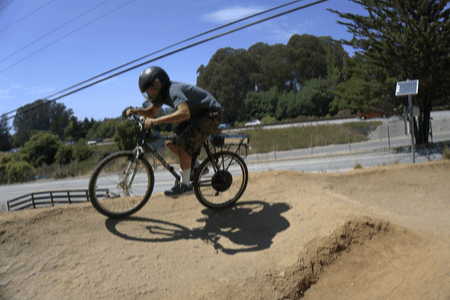 Pump It Up: Extreme Adventures October 2019