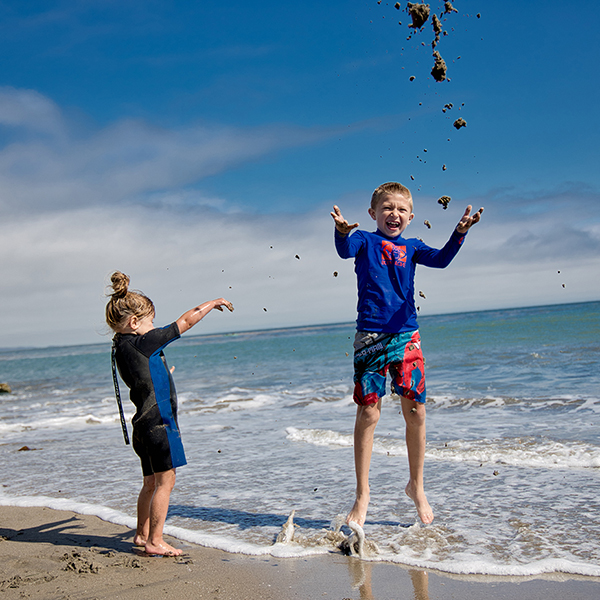 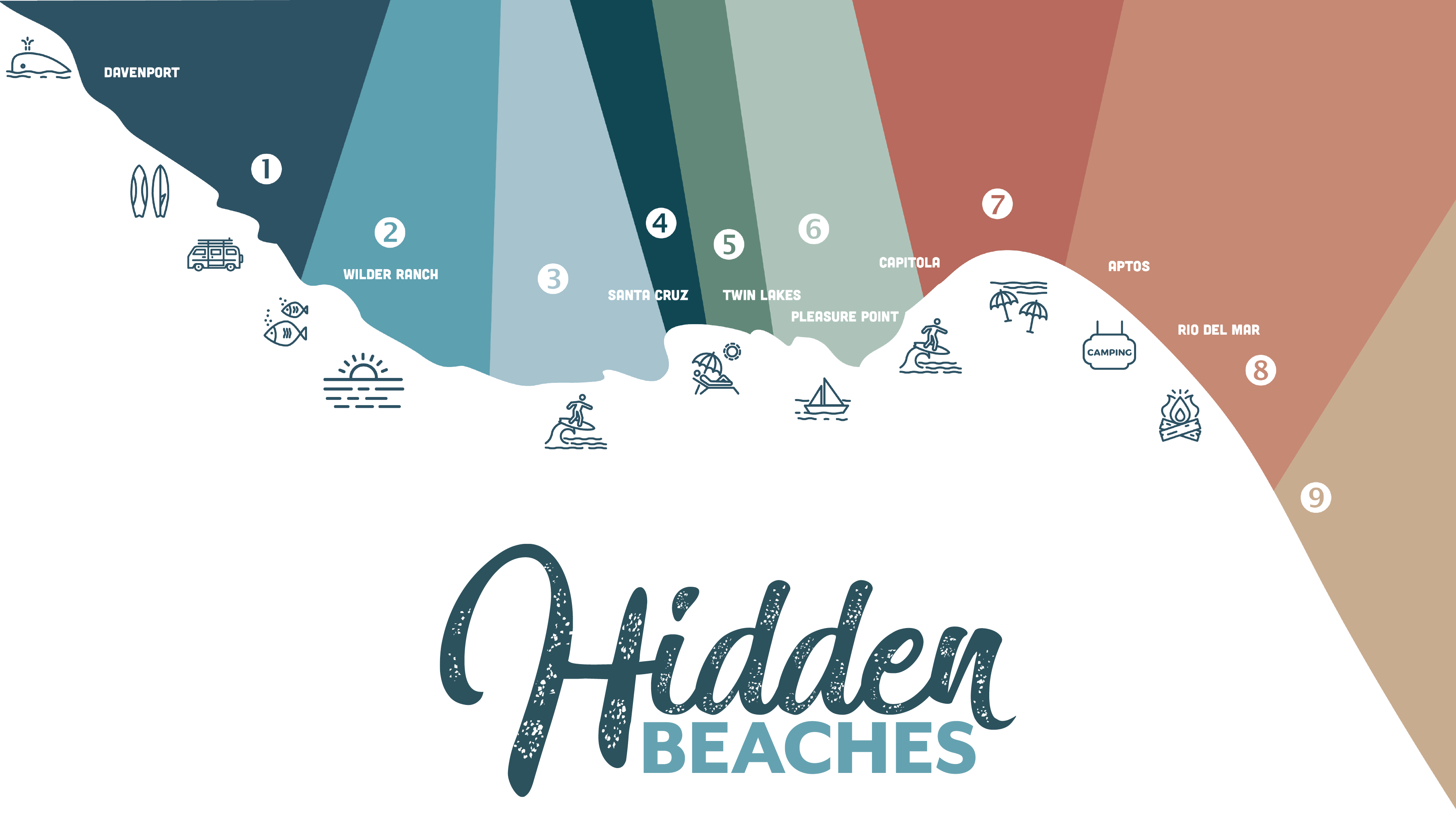 And the Quirky Things We Do There

Take it from the locals, when it comes to beach-going Santa Cruz knows what’s up. Throughout the county there are all kinds of fun and beachy things we do with our children, some more mainstream and others more eclectic. Whatever your saltwater pastime, adventures are limitless in our beach town.

“When I take my 4-year-old to the beach, we always collect treasures (broken shells, crab bodies, feathers, etc.),” said local mom, Nicole Alfaro. “Then, we build a sandcastle and decorate it with our treasures.”

Even when the beaches might not be easy to name or have multiple names, that doesn’t stop us from exploring. Take the Live Oak/East Cliff areas for example. Many of us locals aren’t even sure of the technical beach names in that area, but we find the quant nooks and crannies local-friendly.

“The beach below East Cliff Drive between 36th and 33rd avenues at low tide [are great] to experience the tide pools!” said Jessica Lowe-Wilson, a local mom. Another East Cliff-er chimed in that her and her kids prefer “the Moran Lake/26th Avenue Beach,” also known as ‘Two-Six Beach.’ “There are bathrooms for kids, and usually plenty of parking,” said Krystal Black. “My 3-year-old son likes to use big rocks that jet out as his pirate ship.”

Moving slightly north is another local beach favorite. “I love Black’s Beach [and have] a lot of good memories there,” said Elle Hart, referencing memories of her mother sometimes taking her and her sisters out of school early for some beach fun. “We would stay until dark listening to music, playing volleyball, swimming, eating, etc. It’s a pretty quiet beach on the weekdays [and I] still love going!”

Black’s Beach, also known as Lincoln Beach, is south of yet another local favorite, Twin Lakes State Beach. Rebecca Gold Rubin, who frequents Twin Lakes, appreciates the bathrooms and food near the beach, as does Shelley Russo Huxtable. “When my kids were little, I also had an in-home daycare, so I’d have a passel of kids. We spent many summer days at Twin Lakes Beach. It was worth it to pay to park in the Crow’s Nest parking lot for easy beach access. Food and bathrooms are right there [and] the kids loved climbing and playing on the cement ‘jacks’ jetty,” said Huxtable.

The “jacks” welcome home many Santa Cruz sailors who dock their boats in the harbor in between Twin Lakes and Seabright Beaches. “Love the beach!” said Eve Krammer, who prefers either Seabright Beach or Rio Del Mar. “Baby Bodhi likes to eat sand. All the sand. Sandy diapers are my life.”
Full disclosure alert! I often take my boys to Santa Cruz Main Beach (aka Boardwalk Beach), not so much to rub elbows (a safe 6-feet apart, of course) with the tourists, but because on the Boardwalk side of the San Lorenzo River mouth is a great deposit of driftwood. My 10- and 4-year-olds have become experts at driftwood house making.

Another local mom, Melissa Huggins, strongly discourages parents to allow their children to swim in the river mouth (driftwood houses aside). “Avoid the river mouths, which are contaminated. So many tourists (and locals) play in them!”
Santa Cruz County does caution river-mouth swimmers with periodic contamination and warning signs (to stay up to date on our local beach water quality, please see scceh.com/Home/Programs/WaterResources).

Edging our way closer to the West Side of Santa Cruz, we approach famous and notable Santa Cruz surfing locations. Past Cowell’s Beach (there is an extensive list of all Santa Cruz County beaches below this article), we get to Its beach, also known as Dog Beach. “The ‘Dog Beach’ on West Cliff [is my favorite]!” said Dor Atkinson, local scientist and mother. “My kiddo loves meeting all the dogs.”

Through a myriad of West Cliff Drive beaches, including 2222 Beach (West Cliff Drive at Auburn Avenue), Mitchell’s Cove Beach, and Pyramid Beach, to name a few, we get to Natural Bridges State Beach. “When my kids were toddlers, playing in the creeks running into the rivers was our favorite,” said mother of two and executive, Rhiannon Crain. “It was a surprise to learn from a ranger that ‘breaching’ the rivers sand dams was damaging to spawning fish!”

Though mid and southern-most beaches in Santa Cruz County seem to be more popular among locals, it is pertinent to mention the Davenport area, which still falls within county limits. “We like Davenport beaches because we can take the dog off the leash there and then go across the street to Whale City for some yummy baked goods,” said Rachel Sonnenblick, local mother and teacher. “Sometimes going just that little way up Highway 1 feels like getting out of town for a bit, which can be fun.”

Santa Cruz locals will always find the hidden gems and under-the-radar beach spots. “We love Capitola and always find something neat to look at,” said Melissa Huggins. “Also, one day we went and there were hundreds of pelicans!”

Traveling even more south, we get to the infamous ‘Beer Can Beach,’ more formally known as Dolphin or Sumner Beach. “It’s pretty much a locals beach without any amenities,” said Jamie Lynn Onakoya. “We love that there is a big area of shallow water where the kids can play and boogie board, and the waves break further out so there are smaller waves at the shore.”

Here’s a fun flashback about Seascape Park Beach from a local artist:
“In the late 70s, a dozen or two of us would congregate at Seascape Park Beach (before the Seascape Resort was a thing) for our beach parties,” said Daev Roehr. “We’d park along Sumner Avenue, scramble down the ravine/access path, and head a bit south where we wouldn’t bother anyone else on the beach. The primary activity, other than general goofing off, was to dig a hole in the sand. A giant hole, big enough for all of us to get in for the proof photo op. Then we covered it back up, cleaned up our stuff, and left. Dubbed the ‘hole party,’ we continued this beach tradition through most of the 80s.”

“I loved that area as well,” reminisced former Santa Cruz resident, Petra Kizik. “For me, it was the early ‘80s and the deep iron steps down to the beach until the earthquake took care of that.”

Now into Watsonville, we’ve got the bottom of Santa Cruz County’s beaches. “We love Palm Beach in Watsonville!” said Sara Flores. “We have a two-and-a-half-year-old and a 5-month-old, [and] we love beaches that don’t involve stairs to get into. When I was pregnant it was so much easier to navigate. It has been our go-to beach this entire pandemic. Can’t wait to hold birthday parties in the future there.”
“We love the Pájaro Dunes,” added Loly Rickenrubio. “We dig for clams there and my son loves watching them go back in the sand.”

Whichever beach(es) you and the little ones prefer, it’s all about the memories. One of the easiest ways to make a Santa Cruz memory is to hit the beach! With all of Santa Cruz’s 30-plus well-known and hidden beaches, it would be disservice not to include a robust list of the county’s beaches, starting from northernmost and working south. Happy post-pandemic beach-going!

BEACHES UP And DOWN SANTA CRUZ COUNTY’S COASTLINE

How did our beaches get their names? 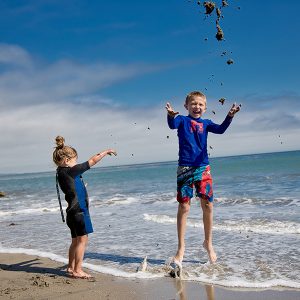 We found an amazing book that collected the origins of thousands of Santa Cruz place names collected by former UCSC librarian Donald Thomas Clark. Here are some beach name origins from the great book, which will bring joy to every Santa Cruz lover.

Some of these are so Santa Cruz, you’ve got to love them.
PS: Some locals think we should keep these beaches our secret, so shhhhh. It’s just for Growing Up in Santa Cruz readers.

Acid Beach
Located on the Pacific, south of Greyhound Rock, it was named for a cache of LSD found there.

Beer Can Beach
This largely hidden gem between Rio del Mar and La Selva was nicknamed by, guess who, high school students because of what they liked to consume there. You have to get to it off Clubhouse Drive in a residential neighborhood.

Breakers Beach
Former name of the beach at 36th, 37th and 38th avenues given to it because of a subdivision laid out there in 1905.

China Beach
Former name of a section of New Brighton State Park Beach named for a hardscrabble village of scrapwood and driftwood used by Chinese fishermen.

Hidden Beach
North of Beer Can, you park on Sumner Drive just past Los Altos Drive and hike down a trail under the railroad trestle. Also, if you are lucky, you can get a parking spot at the park just past the trestle, but you have to get there by driving all the way north by Rio Del Mar and then head south again through neighborhoods. Very limited parking. And be careful at night. There are lots of car break-ins on Sumner. So named because it’s really tucked away.

Manresa State Beach
Near La Selva Beach, it was an old railroad stop named for a resort called Villa Manresa operated by the University of Santa Clara from 1894-1925. The resort was named for Manresa, Spain, where the founder of the Jesuits, Saint Ignatius of Loyola, recovering from wounds in the Battle of Pampeluna, developed ideas for the formation of the religious society. In 1925 the villa was developed into a seaside community named Rob Roy and later, La Selva.

Panther Beach
Located between Laguna Creek and Bonny Doon Beach on the Pacific, it was named because people thought they could see a giant image of a panther in the rock formation.

Potbelly Beach
Between New Brighton and Borregas Gulch, it was either named for the stoves Chinese fishermen used to keep warm there in the 1870s or for a beachside resort there in the 1930s that had potbelly stoves in cabins.

Steamer Lane
One of the most well known surf spots from Lighthouse Point to Cowell Beach, it was named for the giant ships that passed it on their way to San Francisco. 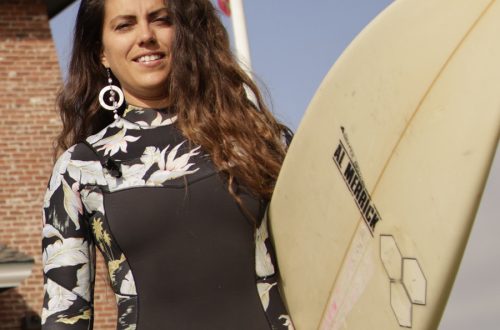 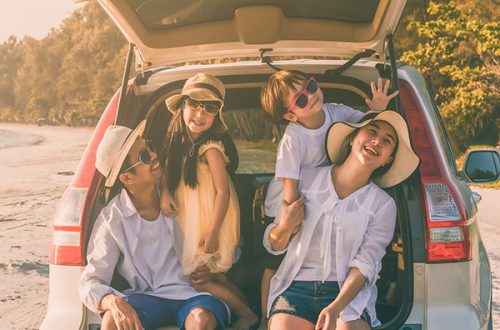 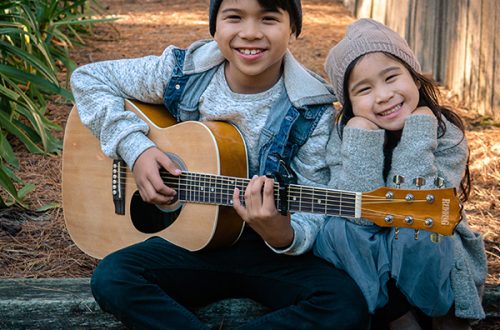